This tool will allow you to communicate to imprisoned Christian brothers and sisters who may not speak English. You will be able to send encouraging letters to Meriam Yahia Ibrahim in the prisoner's native tongue.

You can choose up to 12 phrases from the dropdown below. Once you have finalized your selections, select your desired print format in step 2 to view and print this message from a new tab.

Please add one or more phrases to your letter before printing.

NOTE: When printing your letter, a line that includes the site name "PrisonerAlert" may appear on the bottom of your letter. We strongly suggest that this line be removed so we do not tie your correspondence to any organization. The link may be removed either by cutting off the bottom of the page, or by making a change to your browser settings. 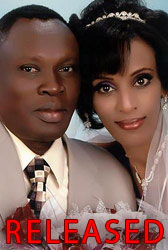 On May 15, 2014, a Khartoum court sentenced 27-year-old Sudanese Christian Dr. Meriam Yahia Ibrahim to death. She was found guilty of both apostasy and adultery. Initially, Meriam was charged with adultery because of her marriage to a Christian man, and the apostasy charge was added upon Meriam's insistence that she was a Christian.

Under Sudanese law, because Meriam’s father was Muslim, she is considered Muslim. Though she explained to the court that she was raised by a Christian mother and never practiced Islam, in the court's eyes, her marriage to a Christian was void and she was guilty of adultery. The court later added the charge of apostasy, or leaving the Islamic faith, when Meriam continued to insist she was a Christian.

Before sentencing, the judge gave Meriam three days to recant her Christian faith; but when the court reconvened on Thursday, May 15, she remained resolute. “I am a Christian,” she said.

She was sentenced to 100 lashes for adultery and to death by hanging for apostasy. At the time of sentencing, Meriam was eight months pregnant with her second child. Application of her sentence of 100 lashes will be a carried out after she has recovered from giving birth. And her death sentence is delayed for two years after the birth of her child, to give her time to nurse her infant. Her daughter, Maya, was born in the prison on May 27.

Meriam’s 20-month-old son, Martin, has been with her in prison since her arrest on Feb. 17. Because Meriam’s husband, Daniel Wani, is a Christian, the Sudanese government sees him as an unfit father.

Daniel Wani emigrated to the U.S. from Sudan in 1998 and became a U.S. citizen in 2005. He met Miriam at church on a visit to Sudan, and the two were married in December 2011. Daniel, who suffers from muscular dystrophy and is wheelchair-bound, went to Sudan last summer to arrange for his wife and son to move to his home in New Hampshire.

In the interim, someone claiming to be Meriam’s brother alerted authorities to her possible apostasy. In court, Meriam testified that she was born in Darfur and raised by an Ethiopian mother, a Christian. Her father left the family when she was 6. She denied knowing any of the people claiming to be her relatives.

On May 28, the Sudanese embassy to the U.S. issued a statement on the case: “This case remains a legal issue and not a religious or a political one. It is unwise and dangerous to politicize the issue at hand to spur religious tension between the two peaceful faiths with similar foundations. Notably, it is important to emphasize that freedom of choice is the cornerstone of both Islam and Christianity.”

The Sudanese government also denied earlier reports that Meriam would be released were true.

If Meriam is put to death, she will be the first person to be executed for apostasy in Sudan since Shariah law was introduced in the criminal code in 1991.

The case is under appeal.

Turning off page headers and footers

Note: These changes are persistent—meaning, printing of the header and footer will be permanently turned off. If you would like to turn page headers and footers back on after using this site, please make note of your default settings before changing them. Once you have printed your letter, use the settings you had copied down to restore your page setup.

Upon launching the print window in the format of your choice, the print settings and preview pane will automatically load (if not, use CTRL+P / CMD+P, or the print button provided in the top right of the window). These options will look very similar across most modern browsers (eg. Google Chrome, Mozilla Firefox, and Microsoft Edge). Expand the More Settings pane, and under Options, ensure that the Print headers and footers option is unchecked (you should see the document preview update as you change this setting).

Other settings you may wish to change are to set Paper Size to US Letter (or A4 depending on your regional default), and use the Default setting for Margins.