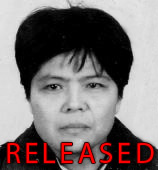 Li Ying, who has been incarcerated for almost 12 years, was released Dec. 25, 2011. Prison authorities told her she received many letters, but never showed her any of them. She is very grateful for the support of so many believers. Please continue to pray for her as she is still under police surveillance.

Journalist Li Ying is currently serving a 15-year prison sentence for her role in the publication of an underground church magazine in China. She was arrested in April 2001 along with 16 others from the South China Church and condemned to death in December 2001.

Her current sentence was handed down during a retrial ordered by the Hubei Provincial Supreme Court in October 2002.

Arrest and imprisonment are not new to this young woman. She has been arrested many times and spent a year in prison in 1996.

Li Ying is a member of the South China Church, one of the fastest growing house-church movements in China. Li Ying cannot have a Bible and is forced to work 15 hours each day on products for export out of China. Please pray for this young woman to remain faithful to our Lord.