Shahbaz Kaka boarded a bus bound from Lahore to Faisalabad in June 2001. When the bus stopped at Jamia Mosque in Faisalabad for a break, Shahbaz visited the restroom along with the other passengers. The leaders of the mosque saw he was wearing a cross and began to question him. Learning of his Christian faith, the authorities objected that he had visited the restroom adjacent to the mosque and therefore accused him of desecrating the Koran saying he had torn out pages and trampled them under his feet. This is a common lie used by Muslims to trap Christians. They contacted the nearest police station and filed a complaint. Shahbaz was arrested and charged with committing offenses under articles 295a and 295b of the Pakistan Penal Code generally referred to as the Blasphemy Law. He was held in the local jail. The authorities did not advise his parents of his arrest or imprisonment. For more than a year, his parents did not know what had happened to their son or where he was. More than three years after his arrest, Shahbaz appeared in court in Faisalabad for his hearing. On September 25, 2004, Judge Shahid Rafiq made the final decision of life in prison for this young man. His attorney has appealed this decision. 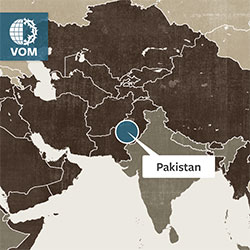