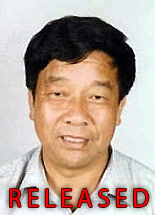 After seven and half years of in prison, Pastor Zhang Rongliang was released. Even though he was tortured and even faced death, Zhang intends to continue ministering and living for the Lord. He has moved to a coastal town to live with a family member, rest, spend quiet time with God and seek his will for future ministry.

Pastor Rongliang thanks the Lord and all those who prayed for him during his time in prison. It is uncertain whether government officials are keeping him under surveillance. Please pray for Zhang as he recovers and continues ministering in China.

Pastor Zhang Rongliang was sentenced to 7 1/2 years in prison. According to China Aid Association the verdict was issued by Zhongmu County People’s Court.

Pastor Zhang Rongliang, a prominent Chinese house church leader, was arrested in a rented apartment at Xuzhai village the afternoon of December 1, 2004. Zhang already had spent 12 years in prison for his faith during five separate detentions. He experienced harsh torture, including electric shock, during his previous prison terms. After being held in prison for a year, officials attempted to transfer him from a prison in Xinmi to one in Zhongmu. Fearing that because of his fragile condition he might die, officials at Zhongmu would not accept him. He was instead taken to a hospital in Xinmi.

Pastor Zhang suffers from diabetes and high blood pressure in addition to other chronic health problems. Later he was transferred to a Zhongmu City hospital where he spent most of February and March 2006.

He appeared in court April 6, 2006, more than 16 months after his arrest, for his third hearing on charges of “attaining a passport through cheating” and “illegal border crossing.” At this hearing the court acknowledged there was insufficient evidence for the case and asked for legal advice from a higher court.