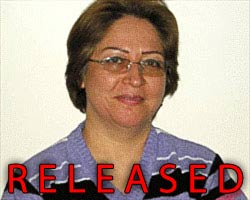 Maryam Jalili, Mitra Zahmati and Farzan Matin, are imprisoned in Iran following their arrest while gathered at a house church to celebrate Christmas. On Dec. 24, Maryam, Mitra, and Farzan were among 15 Christians arrested by security forces in Pakdasht, Iran. After a week without information, family members contacted authorities and demanded to know where they were being held. Officials told the families that the Christians would be released the same day, but instead they were secretly transferred to the notorious Evin prison in Tehran. Twelve of the believers were released on Jan. 4. Security officials have also raided the imprisoned Christians' homes and confiscated their books, computers, phone directories, CDs, DVDs and Christian literature.