Eva Abdallah has been acquitted of the blasphemy charges against her. On Jan. 9, 2013, the High Court of Tanzania ruled that Eva was not guilty of desecrating the Quran, and thus ends Eva’s year-long ordeal in prison. Eva grew up as a Muslim, but became a Christian at age 14. After her conversion, her parents disowned her.

A VOM contact spoke with Evan on the phone Friday, Jan. 11, and reported, “It’s a fiesta before the prison right now!” The final paperwork setting Eva free was yet to be processed as of Friday. Our contact wrote, “I really believe in prison letters. They are effective...”

A VOM contact visited Eva in October. He brought paperwork for Eva to sign in order for her appeal to be filed in the capital. Some sympathetic attorneys are handling her case and deferring payment. The VOM contact wrote that he was greeted by two Christian female guards who are caring for Eva. They both promised to help keep her safe. Since it was not a day for regularly scheduled prison visits, our contact instead had to hand the paperwork through the thick iron bars and exchange a quick handshake with Eva. "She thanked Jehovah God a lot for our visits," he wrote.

Eva Abdallah, 17, welcomed Christ into her life three years ago, though she grew up Muslim. After her conversion, her parents disowned her. Her father is a district Islamic leader. She lived with a Christian pastor until she was arrested.

A group of radicals in her hometown of Bagamoyo on Tanzania’s coast sought to convince her to give up her new Christian faith. When she refused, they accused her of blasphemy for urinating on a Quran, Islam’s holy book. Eva was arrested and put in prison and many Christian leaders were too afraid to get involved in her case because of Muslim dominance in the district. At her trial on July 23, the judge, who was allegedly bribed by the Islamic militants who accused her, sentenced Eva to two years imprisonment. 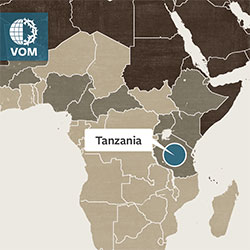