On Thursday, July 17, a court declared Chhedar not guilty on the charge of eating beef. Continue to pray for him and his family.

Pastor Chhedar Bhote Lhomi was arrested for eating beef and sentenced to 12 years in prison. The 37-year-old pastor and his wife were ministering in a remote part of Nepal among Tibetan people. They established a church there which met regularly.

Pastor Bhote and his wife are from an area of Nepal where eating beef is permissible, but in other areas, local Hindus do not eat beef because cows and oxen are sacred as symbols of the gods. In October 2012, local villagers discovered that Chhedar and his family had eaten beef. In an uproar, they accused him of killing the cow himself, and they destroyed his home and everything he owned. The locals handed them over to the Hindu committee, who called police and had him arrested. He was given a sentence of 12 years in prison.

When a VOM representative recently met with Chhedar, he was sad and discouraged. Chhedar’s family is struggling without him. He is worried about his children’s future and his wife’s ability to provide for them. The other students tease and mock his three children, ages 10, 8 and 7, relentlessly.

Our VOM representative wrote, “Please help to get more letters in the jail so that he will know he has believers around the world who are praying for him.” 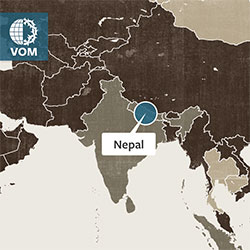