Mohammed Hegazy was recently released from prison after making a public confession on July 29 that he had abandoned Christianity and returned to Islam. The 34-year-old man was released to the custody of his parents.

He had been in prison since December 2013, and his lawyer said he considered himself a Christian as recently as June 2016. Authorities have repeatedly harassed and imprisoned Hegazy, who engaged in a long battle to have his faith and name changed on his government ID card.

Please pray that Mohammed Hegazy will know the love and peace of Christ.

Prison authorities regularly beat Mohammed Hegazy in an attempt to break his spirit. Hegazy’s attorney reports that he is beaten and dragged across the concrete floor several times per week. Hegazy’s head has also been shaved as a form of punishment usually reserved for the most violent offenders. His attorney believes that the beatings were ordered from outside as a tactic designed to force him to renounce his Christian faith. Although Hegazy’s one-year prison sentence should have been completed in December 2014, he is still being held in Tora Prison.

Officials stalled an appeal by Mohammed Hegazy by feeding his lawyer misinformation about his whereabouts for several weeks. A lower court overturned two of three misdemeanor charges against the Christian convert on Dec. 28 and sentenced him to a year in prison for filming Muslim Brotherhood demonstrations without permission. Although he was eligible for immediate release, Hegazy was instead taken to prison. For several weeks afterward, his attorney was denied access to him. His defense lawyer finally located him on Jan. 26 and with Hegazy’s signature, was able to file a final appeal.

Alleging torture in the Cairo prison where he is being held on misdemeanor charges, Mohammed Hegazy began a hunger strike the week of Dec. 8 to protest abuse by prison officials, persecution for his Christian faith, and his “illegal” five-year prison sentence. A court appeals judge is expected to issue a verdict on Dec. 28 that could overturn the charges. His lawyer told World Watch Monitor that he is “optimistic” because no evidence was produced to support the allegations.

Egyptian officials may not permit Mohammad Hegazy to attend his court appeal hearing on Nov. 16. According to his lawyer, if he is not permitted to travel from Cairo’s Tora Prison to the court hearing in Upper Egypt’s Minya governate, his conviction and five-year prison sentence on misdemeanor charges will be confirmed by default. Despite the Minya court’s order to release him on July 20, he was transferred to Cairo to face charges for leaving Islam. In their last meeting, Hegazy told his lawyer that he is still being tortured by prison officials and that they denied his requests for a Bible.

Mohammed Hegazy, an Egyptian convert from Islam who goes by the Christian name Bishoy Armeya Boulos, was sentenced to five years in prison on June 18, 2014 after he filmed clashes between Muslims and Christians in central Egypt. He is accused of filming a demonstration without obtaining government permission, a misdemeanor crime that typically carries a maximum sentence of six months. Bishoy served six months while waiting for conviction after his Dec. 4 arrest.

The true reason for the extreme prison sentence most likely lies in Bishoy’s history. In 2007, Bishoy, then Mohammed Hegazy, petitioned the Egyptian government to change his official religious status, an unprecedented move in a thoroughly Islamic society. Bishoy converted to Christianity from Islam in 1999 at age 17. His public request to change his religious status generated death threats and forced Bishoy and his family into hiding.

After spending several years in hiding, Bishoy’s wife and two children were able to leave the country for asylum in Germany. Bishoy, however, chose to remain in Egypt, knowing that if he left, he’d never be allowed back in his home country. His own experience in hiding and being constantly followed by police made him passionate for the rights of converts to Christianity. He spends his days documenting abuses against Egyptian Christians and advocating for fair treatment.

When he was arrested, Bishoy was in southern Egypt filming clashes that resulted after Muslim Brotherhood candidate Mohammed Morsi was ousted from office in July 2013. Hundreds of Christians were attacked, some kidnapped and thousands of churches and Christian businesses throughout the country were looted and destroyed.

Bishoy’s lawyer told World Watch Monitor that Bishoy is in good condition, though police have questioned him about his religious status, which is totally unrelated to the charge.

Bishoy and his lawyer have filed an appeal against the conviction. 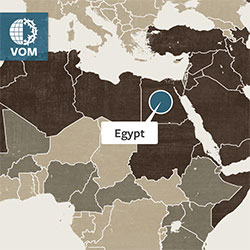