Christian prisoner of faith Yklas Kabduakasov was released from prison on Oct. 2, 2017. The 56-year-old convert from Islam was arrested on Aug. 14, 2015 and sent to a labor camp for “inciting religious hatred.” He returns home to his wife, children and a new baby born after Yklas was arrested.

Yklas Kabduakasov receives up to 150 letters per day from people all over the world. Though the Supreme Court refused to hear his Nov. 2016 appeal, Christian prisoner Yklas Kabduakasov remains in good spirits. He told believers who spoke with him to convey his greetings to everyone who is praying for him.

Yklas Kabduakasov, who was freed from prison in order to serve seven years of house arrest five months ago, is back in prison. On Dec. 28, 2015, a court convicted him of “inciting religious hatred” and changed the 54-year-old father’s punishment to two years’ imprisonment in a labor camp. Fellow Christians are “shocked” at the harsh punishment for the former Muslim. After three months in the labor camp, Yklas is reportedly thinner, but he does not complain. He is preparing to lodge a final appeal to the Supreme Court.

Kazakhstan’s secret police arrested Yklas Kabduakasov, a 54-year-old new believer from Kazakhstan, on Aug. 14, 2015. Kabduakasov fearlessly shared the gospel with his family and friends after his conversion from Islam.

He was arrested after secret police searched his home and confiscated Christian books. The church where Kabduakasov worships was searched the same day. On Aug. 15, a court in the capital city of Astana ordered him to be held for two months in pre-trial detention for spreading “religious discord.” Kabduakasov now faces a criminal case with a possible 5-10 year prison sentence.

Christians in Kazakhstan believe that Kabduakasov was targeted for his conversion from Islam to Christianity and for sharing the gospel with other Muslims. They believe that the secret police are using these intimidation tactics because they want to make Kabduakasov an example and send a message to all Kazakhs that they will face a similar fate if they convert to Christianity.

• Strengthen his faith and help him go through this trial.

• Comfort his family, especially his wife, who is in the last months of pregnancy.

• Soften the hearts of his persecutors, that they would drop the charges against him.

• Provide funds for his family, for legal fees, and for food during his time in detention. 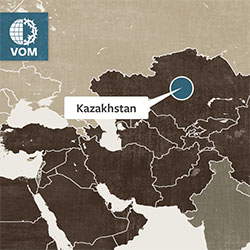