Czech national and VOM Africa Regional Director Petr Jasek has been released from prison in Sudan following a pardon issued by the Sudanese president. Petr has been on staff with The Voice of the Martyrs for 16 years.

Following his arrival home, Petr is expected to be hospitalized to evaluate the physical toll these long months have taken. He and his family request privacy as they reunite and begin to recover from this experience. Petr looks forward to sharing some of his experiences and the lessons God opened up to him in prison after a period of rest, reflection and recovery.

After a lengthy trial, a Sudanese court handed down an extended prison sentence. Petr Jasek was sentenced to life in prison (a life sentence is 20 years in Sudan) on convictions of spying and conducting NGO work without a permit, among other charges. The two men charged with him, Hassan Abduraheem and Abdulmonem Abdumawla, both Sudanese, were sentenced to 12 years each. The main charge against them was “aiding and abetting” Petr’s alleged spying. Local Christians reacted with shock and sadness, and the lawyers for the men said they plan to appeal the sentences. Continue to pray for them.

Petr Jasek, a Czech Christian aid worker, is currently on trial in Sudan along with two Sudanese pastors and another Sudanese man. He was arrested in December 2015 and held for eight months before charges were filed in August 2016. Mr. Jasek and the three others have been charged with at least seven offenses, some of which carry the potential death penalty or life imprisonment.

Mr. Jasek and the other men are accused of breaking several sections of Sudan’s criminal code: conspiring against the state, espionage against the country, entering and photographing military areas and works, calling for opposition to public authority by use of violence, provoking hatred against or amongst sects, and publishing false news. In addition, they also face charges of immigrating in illegal ways and conducting voluntary jobs without permission from the authorities under Sudan’s immigration and passport laws.

In November 2015, Mr. Jasek, Rev. Hassan Abduraheem and Rev. Kuwa Shamal attended a conference for Christian leaders where Rev. Abduraheem was a presenter. While speaking on his work as a church leader in Sudan, Rev. Abduraheem showed a picture of a young man from Darfur who had been badly injured during a demonstration. Mr. Jasek later met with the injured man in Khartoum and donated money toward the man’s medical treatment. As Mr. Jasek left Sudan, he was searched by the National Intelligence and Security Service (NISS), who discovered a receipt for the donation to the injured man. They then confiscated his personal belongings, including his mobile phone, laptop and camera.

Nine days after arresting Mr. Jasek, NISS officers arrested Rev. Abduraheem, who had signed the receipt, and Rev. Shamal. Charges were officially filed in August 2016. At least three court dates have been delayed because a translator failed to appear in court.

Mr. Jasek, who has much experience and training in hospital administration, has assisted VOM in delivering aid to displaced and suffering Christians in Sudan and Nigeria. While his work has always been humanitarian in nature, the Sudanese government has sought to characterize him as a “filmmaker” who was conspiring against the Sudanese state. They claim that his donation toward medical care for the injured young man was actually support for South Sudanese rebels.

Please pray for Petr Jasek and his family. Pray that these men will receive a just verdict and immediate release so they can be reunited with their families. Click on WRITE LETTER above to write a letter of encouragement to Mr. Jasek. Mail your letter in care of the Sudan Embassy in Washington, D.C., to let Sudan’s government know that Christians around the world are aware of his case and are concerned for these falsely accused men. 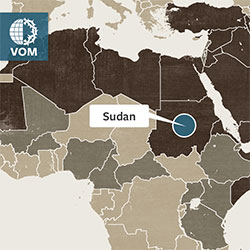