On Dec. 6, 2016, Marat was released from the investigation isolation cell. Then, on Jan. 9, 2017, all charges were dropped due to lack of evidence, and Marat became a free man. He met with VOM workers shortly after his release and thanked them for their support. The VOM workers ask for prayer for his recovery.

Kyrgyzstani believer Marat Niyazaliev is suffering in an investigative prison after being falsely accused of molesting a young girl.

Marat is well-known in his community for his Christian beliefs and for the small church he leads there. Marat preaches in both Russian, the business language of Kyrgyzstan, and Kyrgyz, the local language. He is so well respected that he was chosen to manage the village’s water supply. As a believer, Marat administered the water system with integrity and would not let an influential Muslim man continue to steal water from the city.

To extract revenge, the Muslim man conspired with others to accuse Marat, a former Muslim, of molesting a 7-year-old girl in the village in September 2015.

At the time of the alleged molestation, Marat was in a city about 60 miles away, renewing his passport. He also made a phone call on the bus ride home, and phone records from his service provider verified his location. Even so, in December 2015, Marat was arrested and taken to an investigative prison, where he will be held as his case is processed.

VOM workers met with Marat before his December arrest. He told them how hard it was to live with these accusations. “I haven’t been able to pray normally,” he said. He told them he’d been struggling for the past month since the accusation. He faces the stigma of being a child molester even though there is no evidence.

Since his arrest, Marat’s accusers have changed the charge to a more serious charge – attempted rape – in an effort to force him to confess.

The 52-year-old pastor is married and has five children.

Please pray for the truth to be known. Also pray for Marat’s family and for Marat’s spiritual condition as he withstands this pressure.

***Note: Because Marat is being held in an administrative prison, no prison address is available. Please write to government officials to let them know of your concern for Marat. 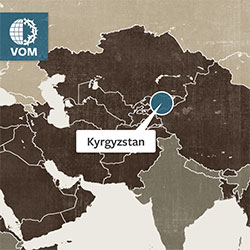